A Few Notes on (my) Code Style 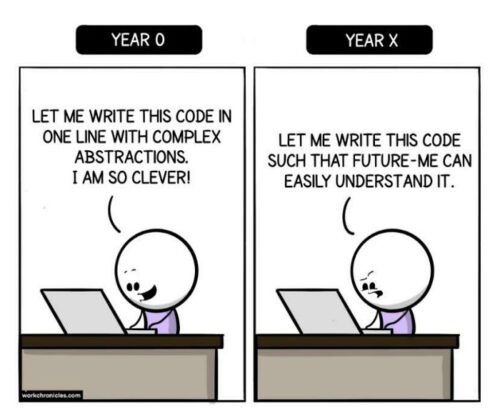 Recently, in my team, we have managed to start periodic talks/discussions on software engineering, including best practices, project management tools, code style, testing and all that jazz. If you are in a large-enough team in a full software house, probably you’re thinking: well, this kind of meetings should be pretty standard in this business. Well, but not in small teams that do bioinformatics research we do all sorts of activities, from writing grant proposals to Agile-style (or kind of) software development, teaching and more.

Anyway, what follows are a few notes I’ve used for one of those meetings, where we have talked about various day-to-day practices on code style and writing programs that are efficient, easy to read and maintain.

As I try to say when I’m asked to talk about these things, I definitely think software engineering is not actual engineering, for it’s more a mix of engineered techniques plus much craftwork, creativity and luck. That’s why, at least in small teams, I don’t want to be too prescriptive of nuances like indentation or naming. So, you’ll read a number of things that are at the crossing between reasonable and personal taste.

I hope you’ll enjoy it. Alternatively, I also have a rude version of it.

Table of contents generated with markdown-toc

I used to be an underscore guy for naming files containing multiple words/bits. However, a few years ago I discovered that search engines prefer dashes. So, I started using hypens, but certainly I haven’t got obsessed with it, if I’ve already a tons of files using underscore, I just leave them as-is. I think that definitely we all should be liberal on it. However, be consistent, don’t mix the two styles on a new directory.

I usually organise the units in a file in a "logical top-down“ order, ie, first the most top-level, most abstract and public units, then what they use for their own implementation, lower level units, private units, eg,

Spaces in expression and statements.

I usually put a space before and after almost any element:

I try to follow the semantics of what I’m writing, to keep together those bits that are logically .together. Of course, in addition to the line length (roughly kept at 120).

I try to indent by following the semantics.

In the examples above:

In these cases, I apply the rules above:

Once more, those are my preferences, there are several other reasonable variants.

If not too tricky, use the language facilities. Examples below.